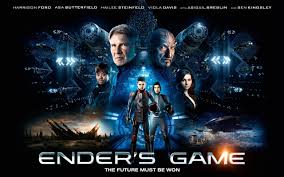 I’m a big reader of science fiction, and Orson Scott Card’s Ender’s Game series is probably my favorite. The only things that come close are Hyperion by Dan Simmons and Lois McMaster Bujold’s Vorkosigan Saga. I’ve read Ender’s Game more than 10 times, including two or three occasions on which I finished it in a single sitting. One of my college papers is based on the novel and is published on Card’s website.

So, as you can imagine, I have been looking forward to an Ender’s Game movie long before I ever thought it might happen. For me, it had the potential to be the best science fiction movie ever made, if done well. After assembling a strong cast, my expectations could not have been higher as I sat down to watch the IMAX version today.

The basic premise is that an alien race, known as the Formics or Buggers, invaded Earth fifty years ago. The invading fleet was defeated, but another attack is expected. In order to be ready to face a species that learns from its mistakes, the International Fleet has come up with a strategy: A program was established to observe the behavior of young children, hoping that the best young geniuses of the time would be able to become the top military strategists by the time they were needed. Ender Wiggin was chosen as one of the trainees.

The movie deviates considerably from the book, but it’s necessary. I am not here to tell you why the book is better, I’m here to tell you whether Ender’s Game works as a movie. However, I must explain some of the key differences. In the book, Ender begins his training at the age of six, while all of the trainees in the movie appear to be 15 or older. I understand that it would be impossible to find dozens of 6-year-old actors capable of carrying this story. Also, the sequence of events is different. Bean, who is a key character, meets Ender immediately, rather than a few years into his training. Ender’s training is supposed to take around eight years, but it seems to happen in months.

The biggest weakness of the movie is the way the battle training is condensed. Again, I realize that few people would want to watch four hours of training, but some of the suspense is missing because so little time is devoted to key events. Some events in the book seem unfair to Ender, but without the background information, anyone who hasn’t read the book will miss the significance. Whenever I read Ender’s Game, I become Ender Wiggin and experience the satisfaction of his achievements. I’m glad to say that I experienced similar feelings during the movie.

IMDB claims that the movie is an action movie, but that’s not the case. Don’t go into this expecting battle sequences or laser fights. They do exist, but not in the form you might expect. I am actually impressed that Hollywood didn’t ruin the movie by trying to include too much action.

Ender’s Game is essentially about leadership, and why individuals choose to follow certain people. Everyone in the school is a genius, but Ender is a good leader because he gains the trust, loyalty, and even love of his followers. The book is full of tactics, and we see Ender and his army discover and develop skills over the course of several years. The armies are comprised of 40 soldiers who are typically split into four Toons of 10 soldiers during battle. I doubt a casual viewer will come away from this movie even knowing what a Toon is. We certainly aren’t shown how Ender’s Dragon Army uses tactics that are completely new. On the plus side, the ending could not have been better, and I was excited to see an important scene present and handled well.

So, does this movie work at all?

As someone who knows all of the background to Ender’s story, I thoroughly enjoyed seeing it come alive on the big screen. The acting was good and the special effects spectacular, although my Kiwi friend reliably informs me that Ben Kingsley butchered the accent. Most of the key events in the book are touched upon, and a fan of the series will automatically catch the references and fill in the blanks. A complete newcomer to the story will probably have a good time, but come away wondering why Ender’s Game is often regarded as the best science fiction book ever written.

I hope that the movie will be successful enough to spawn a sequel. Speaker for the Dead is a much deeper story, and shows what happens to Ender after the war. However, with some people boycotting the movie due to their dislike of Card’s politics, I’m not sure whether a sequel will be possible.

I’ll be adding Ender’s Game to my collection as soon as it is released on Blu-ray, but it would be wrong of me to automatically give it 5/5 just because I love the books. That said, it’s a good attempt to make a coherent story out of very difficult material. It’s hard to show people thinking. If you do like the movie and haven’t read the book, I urge you to do so. I imagine it would considerably enhance any future viewings.

By the way, the trailer gives away almost everything.