Sin City: A Dame To Kill For Movie Review 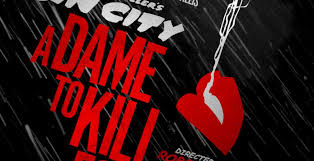 In 2005, I saw the first “Sin City” in theaters and gushed in a review that “it was a fresh, unique and ground breaking (film) on many fronts.” To be fair, that comment isn’t necessarily true in this sequel. Also to be fair, those looking for complicated plots, articulate banter and theatrical heft will be left wanting.

“Dame” doesn’t hide what it wants to be. That is, a stylistic onslaught of visual mayhem, violence, sex and nudity…with just a touch of humor. While this look of the graphic novel is spot on with the mostly black and white motif, it didn’t catch on after the success of the original. “The Spirit” (2008) tried to capture the look and style but failed at the box office. Robert Rodriguez and Frank Miller return with many of the same characters and a few new ones.

Mickey Rourke returns as Marv and becomes the link to the different story lines. He’s the unofficial protector of Nancy (Jessica Alba), evidently the only stripper at the club where everyone hangs out. And apparently as sexy as Nancy is, she never strips either. Her original guardian, Hartigan (Bruce Willis) is but a ghost of his former self. But she’s out for revenge, as is just about everybody, against Senator Roark (terrifically nasty Powers Boothe). Even Roark’s illegitimate son, Johnny (Joseph Gordon-Levitt) who beats his old man at cards and plays a price. I like this new character and would like to have seem more.

Josh Brolin is new but his character, Dwight, is not. He replaces Clive Owen in the role. The centerpiece in the story and the “dame to kill for” is Ava (Eva Green) who had Dwight eating out of her hand years earlier. It made him crazy so he does his best to clean up his act and stay away. But she doesn’t. In a terrific scene she meets him at the strip club. She walks in and everything around her is black and white except for her vibrant blue trench coat. That’s just about the last thing she wears in the movie. It’s no wonder she has men wanting to die for her. The elderly couple in the theater I was in couldn’t take a screen full of bosoms and promptly walked out as younger teens sneaked in.

The film ups the violence quotient to boot. Blood, usually white or red, is everywhere as heads are severed, eyes gouged out and fingers broken. The film is a visual feast with beautifully created scenes and a look that improves on the original. As I said at the beginning it may not have the gravitas and freshness of the original but damn, Eva Green is to die for.