Cinnabon. I can’t stand Cinnabon. In fact, I hate them; I hate them with a passion. You know why I hate Cinnabon? Because there isn’t a store near me. If I want a fresh warm gooey yummy Cinnabon cinnamon roll I have to drive like 45 minutes away. I hate them so much. Excuse me, I need to go somewhere.

Ok, I’m back. You know where I didn’t go? Cinnabon. You know why? Apparently you weren’t listening when I said I would have to drive 45 minutes there and then 45 minutes back, that’s like more than an hour or something.

No, where I went was to my kitchen to get a Mrs. Freshley’s Cinnabon Cinnamon Honey bun. Microwaved for about 20 seconds. Mmmm, heaven. The first thing I had to do however was fight off my daughter who immediately smelled the warm honey bun and made a mad rush for the microwave.  I was able to distract her with a couple mini donuts. Did I forget to mention the Mrs. Freshley’s Cinnabon Cinnamon Mini Donuts? I threw one in the corner, she went after it. Over on the couch, then in the bedroom. Whatever it took. I got my warm honey bun. Don’t worry, I shared. Sort of. I mean, I let her have the donuts and I ate the honey bun, that’s technically sharing right? 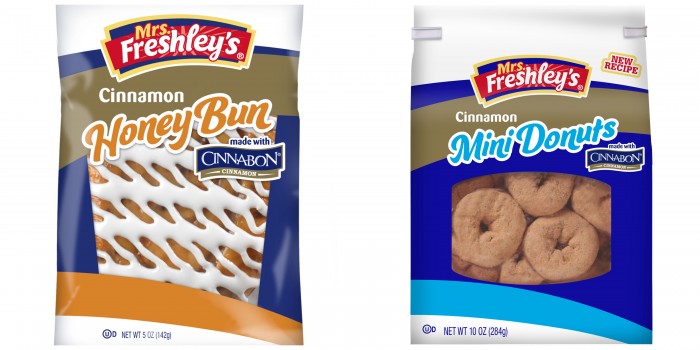 Back in 1994, Mrs. Freshley’s entered the vending market with a focus on baking fresh, tasty products. Soon afterwards, Flowers Foods introduced Mrs. Freshley’s to retail stores and expanded the brand to include more than 50 different delicious snack cakes and pastries.

Indulge your sweet tooth from the comfort of your home courtesy of Mrs. Freshley’s and Cinnabon!

Disclaimer: This product was received from the Company for review purposes only. All thoughts and words in this post are my own and I was not paid to endorse it. I am only voiding my opinion of this product.

Fill Those Baskets with Goodies From Tastykake!
Be the first to comment!
Leave a reply »