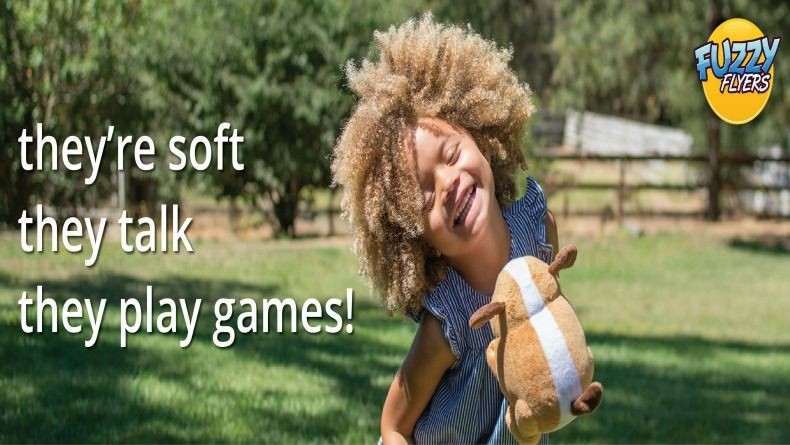 Talk about fun…for your kids.  Ha-Ha, I don’t know how parents will feel about throwing toys inside the house, or all the barking and chirping, but your kids will love these.

Fuzzy Flyers are plush characters that recognize actions and play sound – a whole new category of interaction and gameplay!

EGG TOSS -Throw Chirpie to your teammate and catch it softly so you don’t “break its egg”. Every time you catch Chirpie without it breaking, take a step back.

SKY BIRD – Keep Chirpie in the air to cool it down. If Chirpie gets “too hot”, you lose. Careful, it will “heat up” quickly in your hands. Pass levels of increasing difficultly, and go for the high score!

DANCE PARTY – Do the Coco dance! Keep the song playing by doing the right dance moves as Coco barks them out. See if you can keep up in fast mode.

BARK ATTACK – Roll Coco into a room with your target. When it stops moving, Coco spews loud, annoying barks until it’s picked up! 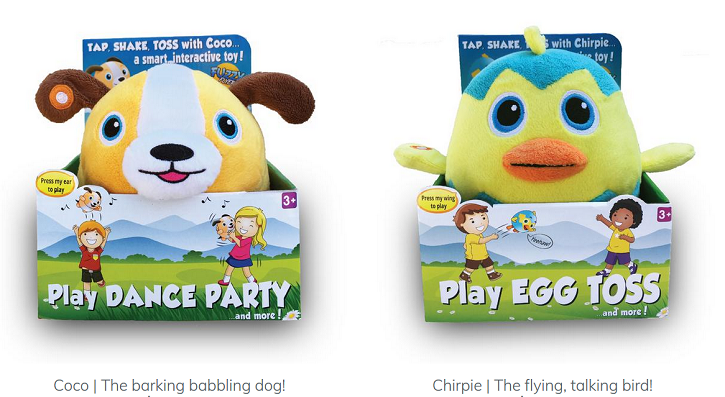 Littles can quickly learn how to play the games, and older ones can progress by having the games last longer and longer.  Soft and cuddly, they can be enjoyed as “loveys” as well as for the game playing aspects.

Turn off the TV – put away the video games – get moving with Coco and Chirpie!  Fun for adult too.  Would make a great party game (especially after a few beverages have been consumed;-)

Disclaimer:This product was received from the Company for review purposes only. All thoughts and words in this post is my own and I was not paid to endorse it. I am only voicing my opinion about this product.

Libby wears many hats. She is a Homemaker*Blogger*Crafter*Reader*Pinner*Teacher*Friend*Animal Lover* Former Early Pregnancy and Childbirth Educator and Substitute Teacher (preK - 12) *Medically Disabled...SURVIVOR! Libby is very happily married to the love of her life (for 41 yeas), the mother of 10 grown children and "Nonnie" to 23 growing grand children. She adores animals, and is "owned" by two furbabies: Gung Poe Wigglebutt ( a Black Pug, who's mission in life is to be her shadow) and Gabriel, SD, CGC, PAT, (her Service Dog, who is a Chocolate Lab/Weimaraner mix). Libby also has two Red Eared Aquatic Turtles, Tucker and Turner, who couldn't care less about her, other than at meal times!
Be the first to comment!
Leave a reply »