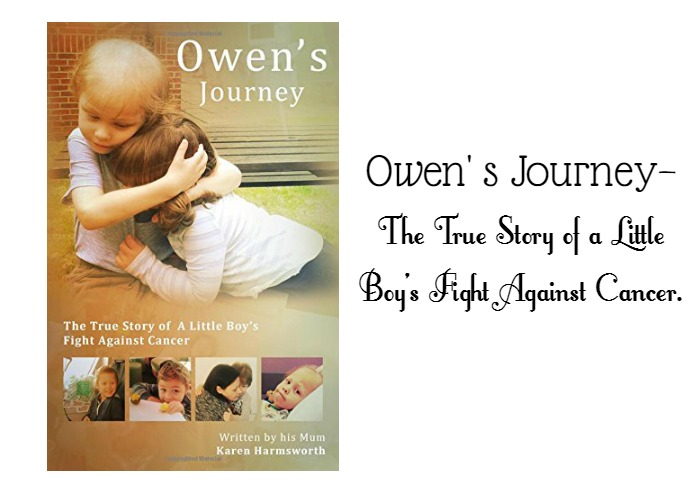 Owen’s Journey is for anyone that is going through their experience with cancer.

Not only did Owen’s mom fight, Owen himself shows strength, positivity, and bravery during his fight.  He is absolutely amazing. This story is meant to possibly help other families that are going through this same fight.  Hopefully, this book will help give some insight, and also awareness of childhood cancer and the overwhelming impact it has on families.

Karen is a happily married, full-time mother of two wonderful children. She was born in October 1975 in Taplow, Maidenhead and was brought up in a three-bedroom house on a council estate with her sister and three brothers. When Karen was just 10 years old her father sadly passed away and her mother struggled to make ends meet. During this truly worrying and devastating time she used to paint, draw or bury her head in books to keep her mind busy. Karen loved to write poems and stories but decided when she left school, after her A Levels, she wanted to try and get her foot in the door of the printing industry. After drifting in and out of temporary jobs and when she was only 23 years of age, she landed a job at a local newspaper printers and produced adverts and property pages before eventually becoming a supervisor overseeing the property newspapers. A few years later, Karen decided she needed a change so applied for a job with a small advertising agency, where she worked as an account handler for a few years, before being made redundant. After a few months of not knowing which way to turn next, she found a job vacancy for a creative art worker at another printing company. Karen successfully got the job and she finally thought this would be where she would stay. Sadly this wasn’t to be the case and a few years later was made redundant yet again. Now at a crossroads, not knowing which way to turn next, Karen managed to get a job at the local ambulance station as a station assistant where her husband, a paramedic was based. It was a few years later when Karen fell pregnant with her first child and after a difficult pregnancy and an extremely traumatic birth, Karen made the tough decision to resign from her job as station assistant to concentrate on being a full-time mother. Owen’s Journey is Karen’s very first book, an emotional story which took her eight months to write. As hard as it was to write, it was part of a healing process for Karen and her husband Dave, and when Owen and his sister Lily are old enough, they will be able to look back and see how far they have come and be proud of who they are..

Protect Your Elderly Parent’s Independence
Be the first to comment!
Leave a reply »